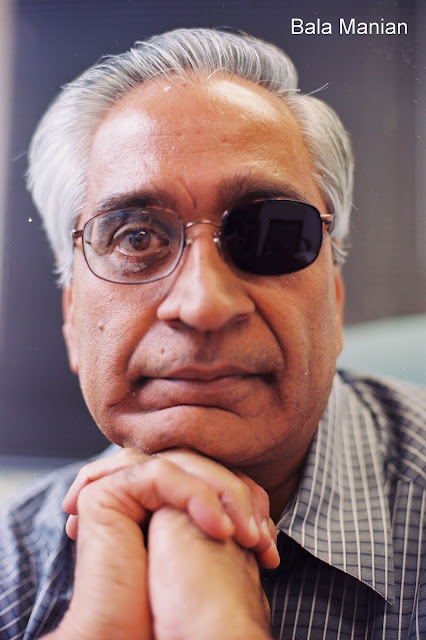 One would think Bala Manian, who lost an eye in childhood in a ghastly accident while playing with a sharp compass from his school geometry box, is limited in his vision. But that would be only physically true. He is probably one of the most versatile entrepreneurs in the Silicon Valley. Digital cinematography, optical imaging, bioinfomatics and biomedical instrumentation are his playgrounds. In the last 20 years, he has created seven successful start-ups in as many different fields of technology. Manian who is a mechanical engineer by training, is the closest one gets to an 18th century French encyclopaedist in a Valley full of frenetic people with narrow vision and a QSQT - quarter-se-quarter tak - approach to life.

When Business India met him at his home in the Valley, he was preparing to visit India and speak to biologists and computer science experts here on the new opportunities in creating an information infrastructure for biological discovery. "Today, by the term bioinfomatics, is understood genome sequencing and protein sequencing. Actually it is much more than that. It is pattern recognition. But there are too many people who talk the talk and very few who walk the walk," says Manian, who cannot suffer shallow conversationalists. "I will see if I can interest some people in it. It needs a confluence of under-standing, of data mining, pattern recognition, clustering algorithms and biology. The cost advantage of doing this in India is clear to everybody. But I have been away from India for 35 years and 1 call myself an NRI - Non Relevant Indian. For me to assume that just because I am of Indian origin, I know what needs to be done in India in the sphere of policy formulation, is presumptuous. As it is, there are too many people going there and pontificating. However, what needs to be done technologically is very clear to me." "I want to illustrate that even though I am a mechanical engineer, I did the whole cell analysis. I did not have biology background, but I did not hesitate. People need to shed fear. Also, they need to focus on what they can do better, since there are so many things one could do. The window of time that is available to you in this life is small. Fads come and go, but when it comes to science, the only way to succeed is hard work. If I can make these three points, then my trip would have been worthwhile," he says.

Manian's understanding of novel technologies and their possible commercial exploitation is legendary. In 1978, when he first moved to Silicon Valley, Eugene Kleiner of Kleiner Perkins, the best-known venture capital firm in the Valley, asked him to be a consultant for the firm. When ICICI started the venture capital firm, TDICI, N. Vaghul, Chairman of ICICI, who is Manian's elder brother, asked him to advise TDICI on which ventures to invest in biotechnology.

Manian studied physics in Loyola College, Chennai, and graduated in mechanical engineering (instrumentation) from the Madras Institute of Technology in 1967. He wanted to set up a business, but one of his professors advised him to apply to the University of Rochester to study optics. "But Rochester was more interested in laser physics and physical optics than the engineering aspects. Hence, soon after getting my MS, I shifted to Purdue University for my PhD and became the first graduate student in engineering optics," he says. However, Rochester beckoned him after his PhD to set up engineering optics there and he spent the next four years in Rochester. Meanwhile, he got involved in industrial consulting for Spectra Physics, a Silicon Valley based firm and developed the first portable laser barcode reader for supermarkets. Manian also did a lot of work for the US spy satellite community in Washington on digital imaging. Besides establishing Manian as a name to be reckoned with in optics, Rochester also helped him get his soul mate. He married Tasneem, a Pakistani pediatrician and both moved to the Silicon Valley in 1978.

At that time, the Star Wars films from Hollywood were gaining immense popularity and set a new dimension in the quality of special effects. Having heard of Manian's reputation in digital optics, George Lukas, director of the Star Wars series and founder of Industrial Light and Magic, approached him to develop new digital special effects technology. That led to Pixar. Manian developed the first three-colour input-output device to take live scenes, digitise them, put special effects, and put them back on film. These effects were used in Indiana Jones-The Last Crusade, The Return of the Jedi and The Adventures ot Young Sherlock Holmes. The Motion Picture Academy, which awards Oscars in Hollywood, honoured Manian with a special award for his technical contribution to digital cinematography during the 1998 Oscar ceremony.

Manian goes to the roots of a technology, sees its possible applications elsewhere, and does not see any borders in his way. This ability to cross boundaries took him into medical imaging. "In those days, CT scan and MRI images had enormous depth in terms of dynamic range. But doctors had to take photographs from CRT monitors, which had poor resolution," he says. "I took the technology that I had developed for Lucas' films and for the army for digital reconnaissance satellites and developed the first laser film recorder for medical imaging. I worked with Kodak on that. I took digital images and printed them directly on film without going through the CRT, so all intermediate degradation in image quality was avoided." "At the time, I was approached by a new start-up called Adobe, to see if I could apply it in the printing industry. But then Cannon came up with a laser printer, so I saw no point in getting into it," he recalls, "So I focused on medical applications, In 1980 I started Digital Optics Corporation and that was acquired in 1984 by Matrix, which was later acquired by Bayer-Agfa, Gene Kleiner told me that time: 'This is not your first or last idea, so you should go ahead and sell the company: He opened up doors for me, I provided venture capitalists with free consulting. Within two years I found something else to do. "

"I had two ideas in life sciences, and thus started two companies simultaneously. One was Molecular Dynamics, which developed the most successful product, called storage phosphor technology, which is used in radiography. It used a radioactively-labelled phosphor in radioimmunoassay, animal studies of drugs, and also in genetics as a marker. The other company was called Lumisys. It did the opposite of what I did in Digital Optics. I knew wideband communications was coming, so community hospitals, which do not have radiology experts should be able to digitise x-ray photographs and send them to experts through modems. Lumisys quickly captured the market for film digitisers. This is called telemedicine today. Lumisys went public in 1995 and Kodak acquired it in 2000. Molecular Dynamics, which had gone public in 1993, was acquired in 199R by Amersham-Pharmacia Biotech."

Bala started Biometric Imaging in 1993, which was subsequently acquired by Becton Dickinson. Biometric Imaging's technology can make thousands of measurements in a blood sample. In 1999, Manian came across a technology from MIT and Berkeley (the original work was done at Bell Labs) relating to nanocrystals, which showed that when very small semiconductor crystals developed some very interesting optical properties - they emit coloured light when light is shone on them, just like dyes do. However, while dyes bleach in a short time, nanocrystals do not. This property makes them useful as markers in studying a biological process in situ. "We can send them inside a cell and see what is happening - did the gene get activated by what I am doing, is there a message there, am I able to detect RNA? Is it expressing cytokine, (a small molecule that plays a role in cell-to-cell communication)? If I put a cytokine, is it activating the cell? Now I can put thousands of them in a small bead, which is only two microns (micron is a thousandth of a millimetre) in size, and use it as a sort of barcode and then follow that individual bead. I can uniquely identify that head," says an excited Manian. And that marked the birth of a hot new start-up called Quantum Dots Corp. Manian, the serial entrepreneur-cum-scientist, holds 35 patents and has about 30 research papers to his credit.

"Unlike most other entrepreneurs you have met, I don't go and start companies. I find a solution to a problem then I use a company as a way to implement the idea. Even though I am the chairman of the company, I can go and sit with somebody in the lab and go to the component level in hardware or check the software code. I enjoy all that. In a lot of ways my approach to entrepreneurship is different from most others," he says.

All his companies are a driving distance from his home. His main preoccupation now is how to apply the information that science has, to biological discovery. He says science is generating islands of information and likens the situation to a Tamil proverb that says five blind men in a room with an elephant will each come up with differing pictures of the beast, depending on which part of it they touch. "People who work on SNI', proteomics and clinical informatics are looking at different parts," he explains. "I believe the next decade is going to be, not one of new discoveries, but of putting it all together and seeking connections. In order to make big strides we have to shed the Pavlov mentality. We have a tendency to do what is being done in University of Pennsylvania or some other place. Somebody has to break out of this and leap frog either from the clinical side or from the basic biology side. There is a great opportunity to recognise multi-dimensional data and begin to see patterns in it and there is no better machine than the human mind for that. That is how IT and biology have to converge."

His wife Tasneem has stopped practicing medicine and is very active in a support network for victims of domestic violence. Manian is on the board of trustees of the University of Rochester. "I want to figure out how to give back to India in education, instead of sitting here and pontificating," he says. We hope Indian universities, CSIR Labs and the Department of Biotechnology are listening.

Posted by Shivanand Kanavi at 8:24 PM No comments: 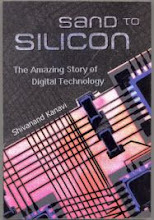 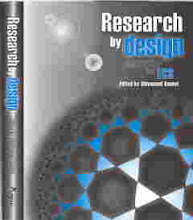