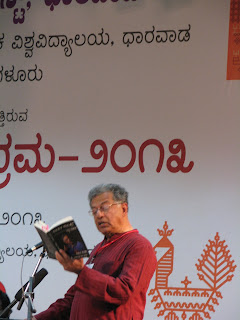 The great warrior king Tipu Sultan, known as the Tiger of Mysore, stood valiantly in the way of wily British colonialism in India. His statecraft was forward looking and was marked not only by burning patriotism but also by administrative efficiency, agricultural development, manufacturing, international and inter-kingdom diplomacy, sericulture, gold mining and refining, pearl culture, toy making, foreign trade, rocketry and development of military technology and manufacturing. However the well known playwright Girish Karnad brings to our notice a little known fact that Tipu was also literally a dreamer. He actually kept a journal where he noted down his nocturnal dreams. Karnad weaves his play around this fact.

It would be great fun to watch a production of the play in appropriate historical surroundings like Delhi’s Purana Kila, but even a reading of the play leads to admiration for the heroic-tragic personality of Tipu as well as the craftsmanship of the playwright.

It is not easy writing historical fiction. There will always be critics looking for historical accuracy. However, if one wanted factual history, one should read a history tome and not fiction. On the other hand there are those who use their characters, historical or otherwise, to mouth the author’s own lemmas and dilemmas. The characters just become cardboard messengers of the author’s ‘message’ and never come alive. If one were to engage in a serious polemic or put forward a thesis then one could write an essay and not dabble in fiction. However we see a large number of authors succumbing to these two extremes. It is only truly good writers who raise their fiction above essays or polemical propaganda. This play proves that Karnad belongs to that select few.

True to the panoramic canvas of nearly twenty years of Tipu’s confrontation with British colonialism, involving three Anglo-Mysore wars, Karnad creates a cornucopia of interesting characters: the serendipitous historian Kirmani; Col Colin Mc-Kenzie who is studying Arthashastra and pushing for a definitive history of Tipu Sultan, typifying Orientalist scholarship when he says “we want to understand our enemy”; the upstart Arthur Wellesley pushed into the limelight by his brother, though he went on later to become famous as the Duke of Wellington after the battle of Waterloo; Richard Wellesley or Lord Mornington, the Governor General, scheming against Cornwallis and pushing his brother Arthur forward with a ‘plum’ position; the ambitious Cornwallis waiting to avenge his humiliation in America; the politically naive Maratha, Haripant, and of course the warrior-dreamer Tipu and his children.

Karnad raises several questions: regarding the clichéd British colonial statecraft of chicanery and divide and rule; the short-sightedness of Maratha tactics; Tipu’s lack of killer instinct and so on, but never imposes his own conclusions. He leaves many tantalizing loose ends so that the reader or the viewer can draw his own. He weaves historical facts regarding Tipu’s progressive statecraft effortlessly into the dialogue.

Many may not know that Karnad’s major as an undergraduate was mathematics. Perhaps as a result one discerns a precision and leanness and balance in his prose. Overall it is an enjoyable play that packs so much in so few pages.

can any bdy help me hea... ??? i hv chosen karnad's ''the dreams of Tipu Sultan'' for ma thesis... n ma contention is "time as a motif in it" or the various interpretations of time in karnad's play .. bt now m lost... can any 1 help me in dis..??? plzzzzzz
m in big big trouble...
its ma face book id.. smokyeyez89@yahoo.com
plzzz