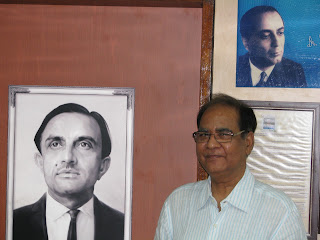 Dr Baldev Raj is a highly distinguished metallurgist and nuclear scientist. He was till recently the Director of Indira Gandhi Centre for Advanced Research of the Department of Atomic Energy at Kalpakkam. He is the current President of the prestigious Indian National Academy of Engineering and has a very large number of research publications to his credit and has been honoured by many countries. He has also co-authored, “Where gods come alive: A monograph on the bronze icons of South India” (2000, Vigyan Prasar). Shivanand Kanavi met him at the Prototype Fast Breeder Reactor facility, Kalpakkam recently and spoke to him about how he got to employ his considerable skills as a metallurgist in studying some objects from our ancient and medieval past and what we can learn from it.

How did you get interested in archaeo-metallurgy? When did it start?

It is a strange coincidence. Prof. C V Sundaram was our director at Indira Gandhi Centre for Advanced Research. There was a fellow of IISc, Dr Paramsivan, who did his PhD in archaeo-metallurgy six decades back! He came to C V Sundaram and said he was interested in the characterisation of bronzes. Prof Sundaram called me (it was the late seventies-early eighties) and said you are doing non-destructive testing, why don’t you work with Prof Paramsivan? I said yes. We then went to the south Indian temples where the bronzes are, and also went to museums which gave us permission to bring them to the lab. The very first results were welcomed and appreciated. Dr V S Arunachalam was the scientific advisor to Raksha Mantri (Defence Minister) at the time and had keen interest in that. He was encouraging and said that good science should be done and that just saying that we have a great heritage does not help. That was the trigger point. Then I got interested in the iron pillar, I got interested in icons, in the temple at Mahabalipuram, and so on. Now I am interested in the characterisation of Ajanta and Ellora using Raman spectroscopy. We also studied the musical pillars of Madurai, which appeared in the cover of the Accoustic Journal of the USA. Now I am as interested in archaeo-metallurgy as nuclear metallurgy.

SK: To begin with, can you explain what is archaeo-metallurgy and why it is important?

BR: Those metal objects were made a long time back, maybe 2000 years or 700 years or 200 years ago.
The very conceptualisation of those objects happened with the knowledge base of that time, and the inspiration was even greater than the knowledge base. Today there may be a much greater knowledge base, but how many things are done with that kind of inspiration? Only such things stand the test of time. We get the knowledge of technology of that time from the scriptures but everything is not mentioned. It is a broad description. They had mastered the technology without the characterisation tools or modelling. So, archaeo-metallurgy is digging into the past metallurgy through reverse engineering. It is very fascinating.
When you still find gaps, you leave the hypotheses open. Sometimes the historians, sometimes the experts in arts, bridge the gap but you provide them the component of S&T (Science & Technology). It becomes useful to them also. In India fortunately there are a number of artefacts for archaeo-metallurgy. In fact one needs to broaden metallurgy to include materials science. Then you cover almost everything — stone, paintings and so on.

SK: In terms of Indian heritage there is a lot of ignorance and, because of colonisation, an inferiority complex also. One tends to think that Europe produced everything. This type of scientific research into our past which describes complex technologies being employed in ancient and medieval India changes that perception.

BR: Earlier nobody was interested in India but today people take you seriously. Of course nobody is interested in hearing claims which have epics as the basis. But if you can use scientific methods then people in the outside world listen. Then even the enlightened tourists would be interested. Take Yoga for example. Because a lot of serious people took up writing, teaching, popularising Yoga (and a few might have misused it also) it enhanced the position of Yoga internationally. Even our work on a scientific basis of Indian science and technology would lift the reputation of India from a low cost centre of cheap manufacture to a people who are capable of innovative and inspirational work. One can then have a robust story to engage the rest of the world with confidence. Even when we studied the south Indian bronzes it was from that point of view.

SK: What did you learn and conclude from that? What got you interested in the south Indian bronzes?

BR: One factor was beauty. The artists were involved in producing more than the daily necessities. How could they produce something which was so inspirational? Bronze technology was mature but nobody had produced such aesthetic objects. They were inspired by the scriptures. Castings at that time were made using bee wax but how did they give them such perfect shape and shine? I think they probably did not realise at that time that they were creating something almost perfect. Material was also not very abundant at that time — they had to re-melt when things went wrong. But if they created something beautiful they incarnated it and installed it in a temple. When I studied the bronzes, I found that they had very few defects whereas even in today’s 21st century investment casting there are so many defects in small pieces! The conclusion I drew is that there are certain things in human creation which come by commitment, which do not come from the technology or machines you use!
They were inspired by the fact that they were creating images of god, and second was the fear of the king who had commissioned the work. In the process they created perfection. They did not even have ways to check for defects that we have. The products were an unparalleled combination of beauty and technology. We have compared with many other things of that time in the world.

SK: What did you learn from the study of the Iron pillar?

BR: Nowadays we are talking about cost effective technology and actually the iron pillar is one such example. It is ordinary iron of no fancy alloy composition, but it has survived 2000 years! That is great science. The anti-corrosion property has been studied well. It is primarily because of the phosphide layer, which regenerates in a few months even if you remove it.

SK: It is said that during Alexander’s time India had steel technology.

SK: Have they figured out how Wootz steel was produced?

BR: We have figured out its micro structure but not been able to reverse engineer it.

SK: Has enough field work been done to find any people with memories of these technologies?

BR: In the case of south Indian bronzes it has been done. The last of the persons who actually knew of it passed away a few years back. Fortunately, we recorded his interview with photographs etc. Dr Sharada Srinivasan and Prof S Ranganathan have done considerable work on Wootz steel.

SK: In building the story of Indian science and technology people have largely depended on epics and the Puranas etc., which many Indians also may not believe, but the material artefacts are indisputable. What we can reconstruct forensically from them would be sound and verifiable.

BR: Yes it would be verifiable by any country. Science has to withstand questions and has to be verifiable by anyone independently. If more and more people take this up as a hobby, it will bring them closer to their civilisation and culture also.
Today when we talk of being global, it sounds very vague. Nobody knows what that means. This kind of work would bind them to their culture and also look at global possibilities. I think this should be taken up by more and more good people as a hobby. Not that one should set up a big lab for archaeo-metallurgy. Every lab can do it wherever there is interest and specialists. Take the Taj Mahal for example, one can do a lot there from the archaeo materials point of view. It has been explored to a great extent from the point of view of architecture. For example, if I ask the question, what is the remaining life of the Taj, what is the answer? Are we expecting it to stand till eternity? Why can’t we explore it? We will learn along the way. We need to put together a small group of 10-20 people comprising civil engineers, material scientists, experts in characterisation etc. That kind of work would attract the attention of anybody in the world!

SK: When I first visited the Taj Mahal what struck me was not its beauty but the technology involved in it. The minarets are conical. The angle of the cone is so small that only when you look at it from far do you notice it. So how did they machine the marble which has been kept in C-sections which are cylindrical but also have a small conical slope? This has been done with such high accuracy that each one sits perfectly on the next one. Obviously this cannot be done by hand burnishing. So what kind of machining did they do to those marbles? Moreover it is over 300 years old. In the period since then there must have been several serious seismic shocks, then how has this structure with-stood it? How did they earthquake proof it?

BR: One should study its foundation, using non-destructive testing methods. Also during seismic events one can measure the vibrations and calculate in reverse and estimate what kind of foundation it must be sitting on. There are a whole lot of issues.

SK: When I visited some caves in Maharashtra in Lonavala, in Ajanta, in Sahyadris or even in Mumbai in Mahakali, Jogeshwari or Elephanta etc.- I had many questions. Some of them were built 1500 years ago in the Satavahana period. I have always wondered how they cut the hard rock. What kind of metallic tools were used? I have asked archaeologists but have not got answers. Similarly, how was the Kailash temple at Ellora built from a monolith? What kind of project management and planning did they do to achieve the outcome?

BR: There are a lot of questions. It is very exciting and one does not know the answers. One has to spend quite a bit of time and research in a step by step manner to get plausible answers.

SK: Thank you Dr Baldev Raj. This has been a very stimulating conversation.
Posted by Shivanand Kanavi at 9:14 AM 2 comments: