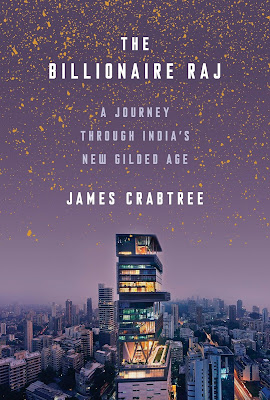 James Crabtree’s “Billionaire Raj” (HarperCollins 2018) makes racy reading with all the details he fills in the vignettes of the characters he chooses to sketch.

A veritable tour de force through the last decade in India. Crabtree’s book is a recollection of encounters with movers and shakers of India. Some are based on direct contact as Mumbai correspondent for Financial Times and others on secondary sources. They read like graphic notes for a future novel or even a Bollywood script. In fact he calls Indian billionaires as Bollygarchs to rhyme with Russia’s Oligarchs.


And so on and so forth.

They are readable and borderline voyeuristic. He interweaves these anecdotes with ponderous quotes on inequality studies, campaign financing in Indian elections, conglomerates and their opaque finances, crony capitalism, sports betting etc.

He begins the book and ends it saying Crony capitalism and ostentatious billionaires are a phase every country has gone through in its capitalist journey and hopefully the glaring inequalities, crony capitalism and all-round corruption will moderate with India’s own clean-up programs and an era of benign Progressive Capitalism. He is ambivalent on whether Modi or Kejriwal or some new political player will do it.

If you are looking for the answers to how do billionaires in India actually rule (Raj remember is rule)? You may be disappointed.

He ignores the emergence of nexus between business and politics going back to 1920’s in India and talks of it as a new child of 21st century India.

This was admitted by no less than Dr Manmohan Singh in 2004 when he said, “As a student of economics in the 1950s and later as a practitioner in government, I was greatly impressed by the ‘Bombay Plan’ (authored by JRD Tata, G D Birla, Purushottamdas Thakurdas, Lala Sri Ram, Kasturbhai Lalbhai, A D Shroff & John Mathai) of 1944. When we read it today, nearly 60 years later, we see how relevant many of the central propositions of the Bombay Plan remain. In those days, it was an unprecedented document. It is worthy of emphasis that nowhere in the developing world had a group of businessmen come together to draw up such a long-term plan for a country.”

Dr. Man Mohan Singh continued, “The Bombay Plan laid great emphasis on public investment in social and economic infrastructure, in both rural and urban areas, it emphasized the importance of agrarian reform and agricultural research, in setting up educational institutions and a modern financial system. Above all, it defined the framework for India's transition from agrarian feudalism to industrial capitalism. In many ways, it encapsulated what all subsequent Plans have tried to achieve.”

So its disconcerting that like most pop historians, Crabtree too calls the period 1947-1991 as “socialist” or even “crony socialism”, whatever that means.

To his credit, Crabtree deftly traces the growth of debt crisis in corporate India, a topic he doggedly followed as the Mumbai correspondent of Financial Times despite official obfuscation. He traces it to opacity of conglomerates and their conjuring up multi-billion dollar projects with nil or very small equity of their own in the go-go years and the banking system that “overlooked” due diligence.

Curiously he mentions only in passing that there are also “good billionaires”, as in IT and Pharma but does not portray them at all. After all India’s global image got a boost in 21st century primarily because of IT and Pharma (exports nearly $140 billion 2017-18).