My mother Shantadevi Kanavi - a tribute

My Avva -- A woman of substance 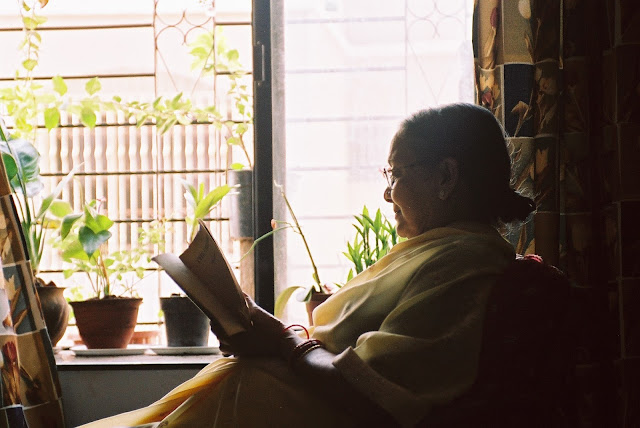 I do not know whether an indestructible, eternal atma exists. My search for this elusive entity has not gone beyond that of poet V G Bhat’s, which reached a dead end at page 153 of Kittel's Dictionary. (see his poem "Aatmashodhane" ಆತ್ಮಶೋಧನೆ - V G Bhat, Akshara Hosa Kavya -Ed P Lankesh, page 56).

My scientific training tells me that the mind, emotions, memory, intellect; self awareness are all functions of the brain and cease to exist when the body stops functioning or what is medically called death. However a person's memories, imprints and influences endure in others' consciousness and life. So we can say a person "exists" in others' consciousness. When the person is a writer, artist, scientist, philosopher etc then she continues to influence her audience and admirers for several years and even centuries and hence live much beyond her times.

My mother’s rich literary work has been commented upon and has been read by thousands of people in Karnataka. Her kind, loving, empathetic and giving nature has been talked about by all those who came close to her; family, friends and even acquaintances.

So what should I write or recall in this remembrance ?

I would like to distance myself from my emotional binds with her as my loving Avva and examine her world outlook as revealed in her thoughts and actions, which certainly played a role in shaping mine too.

Avva had some very strong convictions which she practiced all her life. However she never tried to impose her convictions or her doubts, queries and skepticism on others.

She was not an atheist but all through her life she never went to a temple to worship any deity. She considered religion, faith and beliefs as private matters and not for public display. She practiced her own private meditation in the puja room. She did not believe in astrology and never consulted an astrologer. Though not a science student her rationality kept her away from all the superstitions and rituals associated with astrology like Rahu kaala, Gruhana, good and bad omens, muhoort, Navagruha shanti, Shani's bad effects  etc etc.

She had developed a questioning, rational and that much abused word, "scientific temper"

She respected all those who had taken up service to the less privileged in any form or shape. She respected all those Swamijis and religious leaders too who were engaged in such service without pomp and seeking publicity. But she herself never went to any religious leader or Swamiji seeking moral or spiritual guidance or counsel. The quality in any person she most abhorred even if they had other redeeming ones was false pride, arrogance and seeking publicity. She greatly admired all those who stood upright against injustice, defended the rights of the poor and oppressed men and women and told truth to power.

For Avva festivals were joyous occasions for family get together to enjoy good food and each other’s company and not necessarily for any specific rituals associated. She abhorred pomposity in individuals and in rituals. During a festival any puja would be done by a family member and not by any priest. In fact when my parents had a decisive say in the conduct of marriages in the family they sanctified the union of the couple in the presence of family members with my father reciting some Vachanas of Sharanas of 12th century. But when they did not have a say they left the conduct of the marriage to the wishes of the couple and happily blessed them. They did not wear their ideas and practices on their sleeves or impose it on others including their own children or their spouses.

Many people might say they are followers of so and so religion or belief system or faith but Avva liked the Vachanakaras because many of their thoughts coincided with her beliefs and practices now in the 20th and 21st century. Basically she had formed her own views and practiced them. She started reading up on Buddhism recently for the same reason. She was very much her woman and not a follower of anyone else. For example her beliefs and practices were not those of her mother or father. Her father’s vast home library had tons of Victorian English literature along with modern Kannada literature and also a large section on philosophy and metaphysics. Shri Aurobindo, Jiddu Krishnamurthi jostled with Vachanakaras and Lingayat literature. Her parents revered Shri Aurobindo and Mother of Pondicherry but that did not influence her much. The point I am making here is she was very much her own person. What she believed and practiced was arrived at by her own experience, reading, reflection and cogitation. So is my father but that is for some other time.

She was a rational, realist person who questioned all given "truths".

She was quite turned off by the sound and fury and public display of grief during a funeral. In fact she observed it minutely in a village and based one of her famous stories "Antima samskara" on a village funeral. She also started investigating a realistic alternative to an elaborate funeral and she found it in donation of ones body to medical research in a Medical College. She was further emboldened by three of her relatives actually donating their body thus. However later she did not insist on it when she was ill. Perhaps as a realist she might have realised that anyway she would not be around so what's the point in insisting on it and after all a funeral depends more on the beliefs of the family members than the person who has passed away !

She did not study beyond Matriculation. So when she received Doctorate Honoris Causa in 2014 from the Karnataka State Women’s University at Vijayapura (Bijapur) for her lifetime contribution to Kannada literature I used to pull her leg that she jumped straight from Matriculation to D Litt! But she was a voracious reader from childhood and in fact till her end. At her bedside even in her last days was Jane Eyre by Charlotte Bronte, which she must have been reading for the n’th time.

While she read all her contemporary novelists in Kannada she would never tire of reading her favourites again and again. Her favourite writers were realists. Among the Europeans particularly Jane Austen, Bronte sisters Emily and Charlotte, Charles Dickens, George Eliot, Victor Hugo, Leo Tolstoy, O Henry, Guy de Maupassant, Anton Chekhov. My grandfather, Siddabasappa Gidnavar's home library also had a complete collection of Usha, Jaya Karnataka and Jeevana the pioneering literary magazine of early 20th century that launched many a Kannada writer and she was perhaps the most avid user of his library. So she grew up reading them. She also had read the pioneers of modern Kannada prose as well as writings of her contemporaries: Masti Venkatesh Iyengar, Anakru, Niranjan, Basavraj Kattimani, Tarasu, Kuvempu, Bhyrappa, Shankar Mokashi Punekar, Shantinath Desai, Tejasvi, Lankesh, Gauramma, Vani, Triveni, Anupama, Vaidehi and many others. In her later years you would always find her with a book infront of the TV in the living room.

She loved realists. Because she was a realist in her core personality.

In sum she remained true to her realism all through and did not impose her wishes or aspirations or "ideology" on her characters.

As a parent she was remarkably liberal. Once we became old enough to understand she would share with us the financial situation in the family and what kind of education could afford for us etc. That put a lot of responsibility on us and I do not remember any one of us five children throwing tantrums for anything. As we grew up she exerted absolutely no pressure on us on the career we chose or the life partner we chose; belief systems, political leanings and activism or any other life choices. At the same time she was always available and willing if she found us tense or in need of help of any kind.

In fact as we became parents and grandparents I often wondered whether we forgot how she brought us up and whether we came up to her high standards of parenting.

She was quite firm in her convictions though curious to know any alternative view if supported by evidence. My father is far more circumspect by nature. On the rare occasion where he took a political stand and expressed his views in writings or interviews or actually participated in a protest, she totally stood by him. She saw his anguish before and during National Emergency of Smt. Indira Gandhi (1975-77); or Gokak Chaluvali (1981-82) or the last years protests regarding new citizenship laws etc.

She hated pomp and showmanship in anyone be it writers or anyone else. She herself refused to go centre stage and let her work speak for itself.

How can one be not influenced by such a woman of substance as a mother and loving counsel ? And to that extent she continues to live in us all.

Posted by Shivanand Kanavi at 10:18 PM No comments: