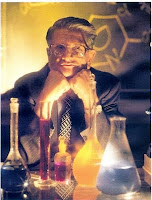 We reproduce Dr Gharda's profile on the occasion of his 80th birthday, which is being celebrated by friends, colleagues and well wishers in the Indian chemical industry on 26th September, 2009

Perhaps, the incident that, best sums up Dr Keki Gharda, the leader of Gharda Chemicals, is a story that has become part of Indian chemical industry folklore. In the early 1980s, Dr Gharda was invited to an Monopolies and Restricted Trade Practices Commission’s hearing, which revolved around a multinational's application for a licence to produce isoproturon. Some Indian companies objected to the application for fear that they would not be able to compete. But Dr Gharda, alone, was of the opinion that there was nothing superior about the multinational's technology. To prove his point, he declared that his company would introduce a new, more efficient process within 18 months and compete with the multinational.

Most of the people who comprised the stunned audience that day would not have imagined that Gharda would be able to pull it off. But he did. True to his words, Gharda realised the danger of using the highly toxic isocyanate route in making pesticides, and came out with a process to produce isoproturon, using urea. Today, he is the second largest producer of isoproturon in the world with large exports to Europe, US and the Far East. The superiority of Gharda's process, which is today internationally known as the ‘Indian process’, made even Rhone Poulenc, the European giant which had a monopoly in isoproturon, sweat.

Since then, Gharda Chemicals has become the leading Indian company in technical grade agrochemicals. Cypermethrin - a popular insecticide; cypermethric acid chloride - an intermediate for cypermethrin; anilophos - a herbicide used, for rice, originally discovered by Hoechst though it now uses Gharda's process; chlorpyrifos- a new generation insecticide; and napropamide -- another herbicide, have all made Gharda a power to reckon with in the global agrochemical scene. In the last three years, a number of international agrochemical magazines have written about Gharda and even put him on their cover.

Gharda Chemcals started as a three-men-in- a-garage operation in the late 1960s, in Santacruz, a suburb of Bombay. Dr. Keki Gharda who had returned from the US after a PhD in Chemical Engineering from the University of Michigan, Ann Arbor, joined the faculty of University Department of Chemical Technology (UDCT), Bombay. However, he could not get a permanent teaching position and he turned instead to entrepreurship.

His first success, in the field of dyestuffs, came fast. He synthesized pthalogen blue, a dye that was very popular in the textile industry but had to be imported from Germany. Later azo-dyes provided the bread and butter. However, with the tremendous proliferation of process technology in the small-scale sector, dyestuff manufacturing was no longer attractive, so Gharda changed course midstream into agro-chemicals.

This time it was not as easy. The early 1980s, the years of transition, were difficult. As a plant engineer in Gharda’s Lote factory remarked, “In those days we were literally living hand to mouth. But unlike other industrialists, Dr. Gharda did not retrench any of the R&D staff. The later years vindicated his visionary faith in in-house R&D”.

That vision has helped him to move with the times. When quality and purity were absolutely essential to gain entry into export markets of Europe, Gharda welcomed the challenge. Today, his analytical lab is not only top class but has made a number of original contributions: half a dozen of them (in Fourier Transform Infra Red spectroscopy and in High Pressure Liquid Chromatography) have become part of international standards.

Today, Gharda is going through another round of diversification into bulk drugs and engineering plastics. But why get into bulk drugs when there are so many players already? “While the Indian' bulk drug industry is strong in organic synthesis, they are not so strong in chemical engineering,” answers Gharda. “With our strength in both, we will be more efficient.” In their typical style, Gharda Chemicals are building plants for products that are yet to come out of their R&D.

But this confidence has got him his fair share of detractors. “He is an eccentric,” says an indignant major player in bulk drug manufacture. “He wants to spoil the bulk drug market by driving down the prices.” His anger is partly fuelled by the not-so-polite letter he received from Dr. Gharda, which categorically stated that since Gharda Chemicals is going to enter the bulk drugs market in fluroquinolones at a lower price, the existing competitors might as well quit!

Therein lies the essence of the man. Variously described in the industry as a missionary, a Gandhian, an eccentric, and a spoilsport, he has nevertheless always approached the market in his own unique manner. His strategy is to come out with new products at prices that are at least 20-30 per cent lower than the prevailing ones and hold them at that level for years. Aside from driving the competition out of the market, it even makes giant multinationals wary of him, perhaps one of the reasons why some of them are queuing up to tie up with him.

And he lives by his own rules. For examples, though he has received many awards for novel processes, he has not patented any. He believes that the superiority of technology should be decided in the marketplace rather than in court rooms. He also shies away from breaking up the manufacturing process into a number of stages and carrying these out in different plants to guard his trade secrets, as most of his competitors do. “This will lead to the right hand not knowing what the left is doing. And you would lose the team spirit where you troubleshoot together and learn from each other” he says. “The name of the game is to come up with newer and better processes and products through R&D and always stay a step ahead of the competition.”
Posted by Shivanand Kanavi at 5:43 PM 2 comments: