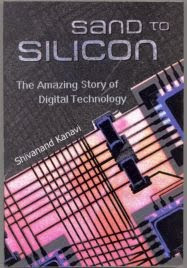 SAND TO SILICON
The amazing story of digital technology

The author asserts the moral right to be identified as the author of this work
Photographs: Palashranjan Bhaumick
First Published by
Tata McGraw Hill 2004
Published by Rupa & Co. 2006

Press Reviews
Mr Shivanand Kanavi's maiden book covers the entire gamut of developments in semiconductors, computers, fibre optics, telecommunications, optical technologies and the Internet, while holding a light up to the genius, individual and collective, that brought the digital dream to throbbing life.
-Deccan Herald
Repaints digital history from the perspective of the contribution of myriad brilliant Indian scientists, researchers, academicians and entrepreneurs, all of whom played a critical role in technological breakthroughs that have made IT what it is today.
-Express Computers
For someone, who would like to know how the World Wide Web came into being, or what a chip really does, Sand to Silicon has all the answers. Surprisingly easy to understand, considering the complexity of the subject. Mr Kanavi simplifies technology for the common man, using ordinary, if unusual metaphors. His book is international enough to be about technology in general, but he takes care to underscore the Indian contribution to global advances in technology.
-Financial Express
Chronicles possibly for the first time-the story from a 'desi' perspective and weaves Indian achievers and achievements into the very fabric of IT and its brief international history. Reading it, will make every Indian proud.
-The Hindu

Response
August 9, 2004
Dear Shri Shivanand Kanavi,
Thank you for sending me a copy of your book "Sand to Silicon: The amazing story of digital technology. I have gone through the book and particularly I liked the chapters "Optical Technology: Lighting up our lives" (page 178) and "Epilogue: The Collective Genius" (page 243). My best wishes.
Yours sincerely,
A.P.J.Abdul Kalam
Rashtrapati Bhavan, New Delhi. 110004

“Kanavi is a gifted writer in the mold of Isaac Assimov. He explains science and technology in a simple manner. This enables hi readers with little exposure to science to understand technology, its phenomena and processes. His book Sand to Silicon starts with the invention of the transistor, which led to digital electronics, integrated circuits, computers and communications. He narrates developments such that readers feel they are participating in the whole process. He also gives a human face to technology by talking about the persons behind it. Everyone who reads Sand to Silicon, irrespective of their background in science of arts, will get deep insight in the world of digital electronic, which had touched our lives from High Definition TVs to mobile phones.”
-F C KOHLI, IT pioneer

“We are witness to the way information and Communications Technology (ICT) is revolutionizing everything around us today. Shivanand Kanavi provides a compelling and breathtaking account of the science and technology that went into this revolution, with simplicity and elegance that is the hallmark of his writings. Equally fascinating is his account of the role of the ‘Indian genius’ in powering the ICT revolution, with the rarest of rare insights acquired through painstaking research, this masterpiece is ‘must’ for everyone.”
-R A MASHELKAR, FRS, Former DIRECTOR GENERAL, CSIR

“There is proverb in Marathi, which roughly translates into, ‘with committed efforts one can even squeeze oil out of sand’. Sand to Silicon is a saga of human ingenuity and efforts in realizing ever better results, which have made a paradigm shift in the history of human development. I would like to compliment Shivanand Kanavi for bringing out this book, which I am sure, would benefit all those readers who are interested in today’s technology revolution.”
-ANIL KAKODKAR, Former CHAIRMAN, ATOMIC ENERGY COMMISSION

• My parents, Chennaveera Kanavi and Shanthadevi Kanavi and in laws Col. Gopalan Kasturi and Lakshmi Kasturi who inspired me to become a writer.

• Last but not the least my wife Radhika and children Rahul and Usha for very generously writing off all my idiosyncrasies as due to "writing stress".

For hundreds of people in the IT Industry and academia who looked at it as their own project and gave contacts and suggestions.
Shivanand Kanavi