Dr Anji Reddy, founder of Dr Reddy's Laboratories (DRL) passed away yesterday on March 15, 2013. I had met Dr Reddy many times and discussed the issues in Indian Pharmaceutical industry as well as the research and development in his company. His passion to discover new drugs, rather than just copy and manufacture the generics of what others had already discovered, even though he himself was a large player in the generics business, was visible in all our interactions. Below are some excerpts from an article I had written about him in Business India in December 2001. 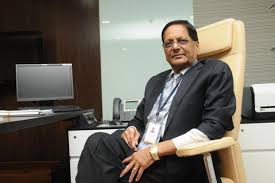 "Reddy showed promise in research long ago. According to his elder sister Rajamma, he used to open up germinating beans when he was four to see how the seedling was coming out. Reddy spent his childhood in a small village across the Krishna river near Vijayawada, where his father was a prosperous farmer growing turmeric. His early education took place in Hindu College and Andhra Christian College, Guntur. He has really fond memories of his days there. When we accompanied him to these places he was distressed to find that his chemistry lab had been shifted from its old premises at Andhra Christian College. A sentimental Reddy told the principal and head of the department there, “I will give you all the modern equipment to build a modern analytical lab. My only request is that you restore my old lab to the same premises.”

After his BSc in Guntur, Reddy joined UDCT in Mumbai to study pharmacy. He was greatly influenced by the atmosphere at UDCT. “The academia there was very close to industry. I liked it,” recalls the entrepreneur in him. He then went to National Chemical Laboratory, Pune, to study for a doctoral degree. This time he decided to switch his field from pharmacy to chemical engineering, since bulk drug manufacture was mostly chemical engineering. Not an easy switch. “In fact I was very hesitant to take him on as a student,” recalls L.K. Doraiswamy, a distinguished chemical engineer who later became the director of NCL and is currently Anson Marston Distinguished Professor in Engineering Emeritus at Iowa State University.

But Reddy did not disappoint him. “Indeed, I have rarely taken a better decision in recruiting students, and even scientists. He not only produced a very fine thesis, but also worked on a side problem to produce a paper in a matter of weeks, which to this day is quoted in practically all books and reviews on Properties Estimation. The Reddy–Doraiswamy equation developed by him (with little assistance from me) for predicting liquid diffusivities has lost none of its original flavour,” he declares.

Anji is a short form for Anjaneya or Hanuman, who was the village deity of Tadapalle and every family had an Anji in it. According to the epic Ramayan, Anjaneya carried the mountain of gandhamadan to cure the battle- wounded Laxman, since he did not know the taxonomy of the herb sanjeevini that was needed. Anji Reddy, however, does very focused research into molecules and does not bring a mountain.

When we visited his village he showed us the railway bridge he used to cross over the Krishna in spate to reach Vijayawada on the other side. The old bridge has vanished and modern bridges are in place. As we walked with him across the bridge he was able to recall many an old story with brief intermissions for conversation with his research teams in Hyderabad and Atlanta on his mobile phone.

As we walked with him we realized that Reddy is truly crossing a bridge in his career. From a generics manufacturer, to a research - based Pharmaceutical company; from an Indian footprint to a global one.

What does a “visionary” mean? Is it that others around him are blind? No, most people can only see what is around them. They cannot see what is not there or what is in the distant future.


Posted by Shivanand Kanavi at 7:23 PM No comments: 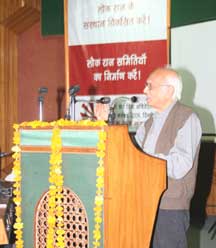 Friends,
I am unable to be present at this meeting in memory of T S Sankaran. I would like to present a few thoughts on what I learnt from him.

The unresponsiveness and callousness of Indian state towards the poor and oppressed is legendary and any aam admi can attest to that. It clearly needs a thorough renewal. Its colonial attitudes and procedures need to be jettisoned. While such a demand may seem very reasonable and necessary in the interest of democracy, the weight of vested interests in the status quo will resist such changes tooth and nail and make such a logical and democratic demand require a massive revolutionary effort.

However does that mean that there is no place for mass agitation towards legislative reform, administrative reforms, new social security schemes to give some relief to the downtrodden? We all know that in our parliamentary democracy dozens of bills can be passed in a single day without a figment of a debate, because there is a consensus among ruling circles about them. But anyone who has made bold to suggest small reforms in the system in favour of the poor and oppressed, leave alone a radical new law, knows how the system can deaden all your good and reasonable ideas, even if backed by large mobilization of democratic opinion and people.

This inertia for change in the oppressive status quo has historically pushed a large number of socially active individuals towards revolutionism and even armed resistance with no better results to show.

How does one strike a balance between the tenacious, persistent effort to reforms in favour of aam admi and dreaming of, and organising for, a real democratic and responsive governance in the future, where people are empowered, where there is direct democracy? These are the problems that haunt a person who is socially active for any considerable length of time.

T S Sankaran through his life and work showed all of us, how to do both with his own example.
In the last three decades we have been through extraordinary times in our polity and economy, replete with: insurgencies; state terrorism; pogroms of minorities; violence against all democratic movements; draconian laws that sanctify violent and arbitrary activities by state agencies against the life and liberty of people; destruction of livelihood of many; extreme rise in the cost of living and at the same time an ardent desire rising among increasing number of people that there is a necessity for change; that we need to be empowered in this polity to realize our individual and collective dreams.

T S Sankaran responded to these events and developments as an upright individual. Moreover, he also worked with other likeminded people, to build organisations and work as a team, to sacrifice ones individuality to an extent and come under a collective discipline for the greater good of society.

All these values were reflected in his work in the working class particularly among the “unorganized” informal sector; in his leadership role in the Committee for People’s Empowerment and Lok Raj Sangathan; his relentless championing of democratic rights, trade union rights, human rights, rights of nationalities; the movement for electoral reforms; the movement to raise awareness about direct forms of democracy with a fully empowered citizenry and so on.

He not only exercised leadership through his enlightened ideas and proposals for action, but also in his method, as a leader, of dealing with difference of opinion that are bound to be there in any gathering or a meeting.

He did not exercise tolerance.

He actually respected others’ views and not just tolerate them. He was always a considerate listener. He was a living example of the Indian tradition, which believes in the relativeness of truth, of partial nature of truth understood by different individuals. He followed the tradition that expects a full understanding of the other view, the poorva paksh, and a humble presentation of one’s own views to carry the dialogue forward.
This did not mean endless debate and paralysis but one was always aware of the partial nature of one’s understanding, which itself brings in humility and destroys the hubris of certainty.

He practiced this profound approach in every meeting, which led to united action despite at times differing perceptions. That is what made him a unifying leader.

He was a father figure, who many like me affectionately called Mama. His wise presence will be greatly missed but his memories and lessons from his life and work will remain.

Posted by Shivanand Kanavi at 7:05 PM No comments: