An inspiring teacher and gentle mentor:

My memories of Prof Rajshekhar Bhoosnurmath 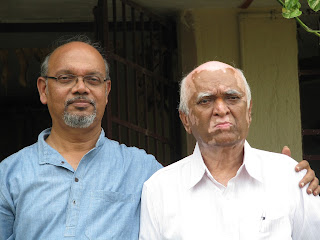 My interactions with Prof Rajshekhar Bhoosnurmath (RaBhoo) during the period 1969-72 bring back happy memories. They may be 4 decades old and some details might have blurred but a few things clearly stand out.

As a teacher he was outstanding. We were particularly fortunate to have several excellent teachers in the Physics department of Karnatak Science College in those days. Professors Katti, Mrs Tigadi, Gadad, Maralappanavar were all very good, inspiring teachers, who were simultaneously teaching us various subjects.

He taught us Electricity- Magnetism and Kinetic Theory of Gases and Heat and Thermodynamics. They were not particularly modern or subjects considered “cool” by students, unlike Atomic and Molecular Physics or Nuclear Physics or Quantum Theory, which used to fascinate us being more contemporary and mysterious. He had been assigned topics which were classical, primarily developed and well understood in the 19th century. The names one often came across were; Faraday, Ampere, Coulomb, Volta, Tesla, Maxwell, Boltzmann, Carnot ; whose pictures in text books looked forbidding and distant like some ancient Rishis.

He managed to weave a web of fascinating concepts even in these dry and “settled” subjects. I can still remember his child like enthusiasm in explaining the Maxwell’s Demon-a thought experiment, Second law of Thermodynamics or the Continuity Equation leading to completion of Maxwell’s quartet of electromagnetic equations which predicted the existence of electromagnetic waves and a great triumph of classical physics.

Besides being a good teacher with good black board work he was extremely accessible. He encouraged us to read Feynman’s Lectures in Physics and many other books which were not prescribed. He was also in-charge of the departmental library and made sure that we could have free access to the same. Those were also the days when a far reaching agreement was signed between US and Indian governments and a large number of books on science and technology and text books by US authors, were brought out in inexpensive and accessible Indian editions. He made sure that the library had copies of all these books.

He took keen interest in students’ activities and encouraged us to form a Physics Association. It had been hardly a few months since Neil Armstrong had stepped on the moon when we were all glued to our transistor radios to listen to the live commentary on the Voice of America. We used to have plenty of films from the USIS about the Mercury, Gemini and Apollo programmes, which used to be screened with 16 mm projectors. The atmosphere was right for us to be excited about science and technology and be engaged in extra-curricular activities in the same. We were able to organise some enlightening lectures. I particularly remember one on Quantum Physics and Wave Particle Duality by Prof Katti and on Space-Time by Prof Korwar. As a mentor to the Physics Association, RaBhoo constantly encouraged us.

Besides these “official” interactions in the college, I made bold to walk into his home in an evening with a couple of friends without a pre-arranged appointment. He welcomed us and treated us to tea and snacks and we engaged in “guppa” on science. He encouraged us to read on philosophy of science. His favourites were Bertrand Russell and A N Whitehead. He once mentioned to me that he was keen to do his doctoral thesis on Whitehead’s philosophy but various circumstances conspired against it. We became regular Atithis (uninvited guests) at his home in the evenings, enjoying the hospitality of Mrs Bhoosnurmath and the conversation with RaBhoo. I remember reading Russell’s “ABC of Relativity” and George Gamov’s books on astrophysics at his insistence. I greatly benefitted from both.

While I was keen to read more on science and especially popular expositions of advanced topics, he had slowly turned from science to science fiction. His science fiction stories started appearing in Sudha and other mass circulation Kannada magazines and started a new genre in Kannada. As voracious teen age readers we were hooked on to Alistair Maclean, Ian Fleming, Herald Robbins et al. RaBhoo encouraged us to read classic science fiction of Isaac Asimov and Arthur C Clarke as well and generously lent us books from his personal library. RaBhoo went on to become a prolific writer in this genre in India and has been a train blazer for Kannadigas. I wish his writings get translated into English and International science fiction aficionados recognise his creative genius.

He was happy and wished me well when I joined IIT Kanpur for MSc in Physics and later went to US for higher studies. Our regular interactions stopped nearly 40 years ago. I was delighted a few years back to receive a call from him. He was visiting his son Vishwanath in Navi Mumbai and we were again able to reconnect briefly and catch up. As usual he was brimming with ideas and plans to initiate new activities.

As I near sixty years of age, I now realise that though I consider myself a proud product of Dharwad, in actual fact I have spent two third of my life away from it! But clearly those formative years have left an indelible print and Karnatak College and RaBhoo are all part of what I am made of and I remember one of the few shlokas from childhood, learnt from my father: