U R Ananthamurthy- A Tribute 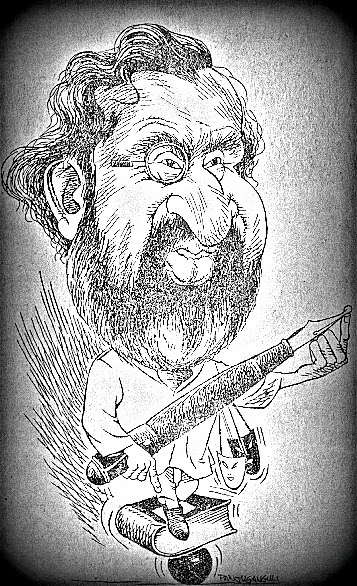 U R Ananthamurthy passed away on August 22, 2014 evening in Bangalore. I cannot add much more to the prolific literature produced by many admirers and critics of his writings and hence have reproduced below an article I had written in The Sunday Observer 21 years ago in 1993 when UR was elected as President of Sahitya Akademi.

I had met him as a boy at our home in Dharwad, just as I had met scores of other Kannada writers since I grew up in a family of amiable and hospitable writers. But my first direct encounter with him as an adult was when I had done a mid- career switch from Theoretical Physics and political activism to journalism.

He was refreshingly friendly and evolving and had clearly shaken off the rebellious and at the same time bewildering Eurocentrism of Modernism and was discovering India in his own way.

He had also come out of the narcissism of Modernism and Existentialism of the 60’s and 70’s and had also become a socially active person. He was taken aback by the communal frenzy whipped up along with the Ayodhya agitation, like most other intellectuals and was keenly learning about Human Rights issues and taking forthright stands on them.

Despite not knowing him too well I could engage with him very quickly whenever and wherever we met. When I complained about the rootless Eurocentrism in Indian Modernism he quickly pulled out a copy of his "Sooryana Kudure" and gave an autographed copy for me to read, where he had substantially evolved in his own approach to modernity.

He was one among the most creative triumvirate of Modernist Kannada literature of the late sixties and seventies (the other two being the Late P Lankesh and K Poornachandra Tejaswi). Besides his literary admirers, he will also be missed by all who care to step out and fight for justice and human rights of ordinary people in India despite being surrounded by consumerist fog.
Even in his failing health in the last decade UR found new founts of energy and used to regularly surprise people by his appearance and serious participation in literary meetings and activist agitations, at times straight out of hospitals.
May he rest in peace.
---------------------------------------------

If the human resources development minister had his way - in this case, government nomination as opposed to election to the presidency of the Sahitya Akademi - the literary body would have remained firmly under the control of the politicos.

The election -- by a thumping 52-15 majority of the members of the general council - of Kannada litterateur U  R Ananthamurthy was as defiant, as emphatic a riposte as they come.
Before the poll, the Akademi's General Council rejected a letter the ministry sent the literary body that quoted the Haksar committee recommendations and called for government nomination to the president's post.

While accepting those recommendations that dealt with the better functioning of the Akademi, the council stuck to its guns regarding elections and, what is more, underlined their point that the Akademi is about writers, not politicos, by picking Ananthamurthy - a stormy petrel if ever there was one. For it was the president-elect who, way back in the 70s, boycotted the annual Kannada Sahitya Sammelan on the ground that the official gathering was pro-establishment and not prone to innovation. Ananthamurthy went on to hold his own rebel convention on that occasion.

Interestingly, critical opinion of the Akademi's functioning today mirrors Ananthamurthy's own grouse against the Kannada Sahitya Sammelan way back then. What remains for time to tell, of course, being the question of whether the fiery novelist and critic can bring his organisational acumen, diplomatic skills and iconoclastic frame of mind to sorting out the problems besetting the Akademi.

The beginning of his tenure, however, certainly augurs well for the immediate future. One of his first acts on assuming presidency of the Akademi has been to institute a committee to examine the Haksar recommendations. Ananthamurthy has, besides, invited suggestions on ways of improving the organisation's functioning.

Applying his new broom to yet another contentious area, the president-elect has decided that the Akademi's executive committee should be just that - a body charged with the sole task of executing policy. In the past, it may be recalled, the executive had also functioned as a selection board for the
Akademi's prestigious literary awards, inviting in the process not a little criticism and allegations of bias. That will now stop.

On a related track, the president-elect has also decided to make the selection process governing the awards more open, more transparent and therefore less likely to attract criticism.
A la the prestigious Booker awards, Ananthamurthy has decided to employ the twin steps of announcing both the jury and the short list of works under consideration, well before the actual awards are named.

The new broom, on the face of it, would seem to be sweeping clean with a vengeance.
Ananthamurthy first made his mark as a critic in the early 60s with his award-winning col-
lection, Prajne mattu Parisara (Consciousness and the environment), which was a conscious attempt to apply the theories of people like George Lukacs, Herbert Marcuse, Milovan Djilas and Erich Fromm to contemporary Kannada literature.

Ananthamurthy consolidated a burgeoning reputation by becoming the interpreter for Gopalakrishna Adiga's Navya poetry and as the theoretician for the modernist movement in Kannada literature. Navya, at the time, came as a rebellion against the metaphysical and aesthetic excesses of the romantic Navodaya literature that had dominated the scene in the first half of the century. His own creative contributions - short stories and novels, not to mention the occasional dalliance with verse - became landmark works of the Navya genre.

Controversy swirled around the man right through his career. When the film version of his novel Samskara hit the screens to critical acclaim, Brahmins viewed it as an attack on their orthodoxy. And even before the furor died down, Ananthamurthy kicked off another one when he presented a paper at a seminar, in which he classified Kannada literature on the lines of the Brahmana Sahitya and Shudra Sahitya.

Ananthamurthy's attempt was to distinguish between the cerebral appeal of what he termed
brahmana sahitya and the visceral, sensual appeal of the shudra variety. Critics however saw in his theories an attempt to communalise contemporary Kannada literature.

Along the way, however, the movement degenerated into formalism and complex mystery.
Resulting in the inevitable alienation from the growing literate masses who were then left to the mercies of pulp writers, while the writers themselves were polarised into Indocentric and Eurocentric camps. And as social and political tensions built up in the mid-70s culminating in the Emergency, Navya literature died a natural death even as more socially conscious literature, removed from the earlier obsession with self, became the emerging trend.

Ananthamurthy's response came via a number of short stories in the collection Bekku mattu Akasha (The Cat and the Sky) and a couple of novels. Even as changing literary styles saw Ananthamurthy metamorphosing, moving and, often times, helping shape the trend, the mind of the man shifted stance and outlook. Often, it may be added, in unpredictable directions. From the policies of Ram Manohar Lohia (an early hero) to an admirer of the Pejawar Swami of Udupi Mutt and a leading light of the Vishwa Hindu Parishad was a quantum leap from Leftism to Vedicism that left admirers aghast - but the man held firm to his right to change, to develop.

"I quarelled with Marxism," says Ananthamurthy in response to a question on his changing ideological stance, "because they only looked at the change in the capitalist relations of production, not a change in the mode of production itself to a more decentralised system. I stayed away from
Gandhism when it became sarkari. I moved away from Lohiaite ideals when people like Raj Narain made a mockery of it. Anyway," argues Ananthamurthy, "I am a writer, not a politician. Don't look for ideological consistency in me."

Even in his writings, Ananthamurthy has tended to attract criticism. For instance, it is held that while exploring different sides to a phenomenon, the novelist in his writings never succeeds in making his own statements. "One has to learn," he says, "to write about the other point of view. In that sense, writing cannot be clear. But action has to be simple, easy. In fact, this is exactly what I have attempted to convey in my last short story, Sooryana Kudure (Solar Horse)."

On his own election, he says, "It is a testimony to Indian literature's plurality, that I as a Kannada writer have been elected to the Akademi's presidency. Plurality is a fact of existence and a condition with which the Indian writer has to cope, it is a condition that has to be preserved. For it is only from this plurality that an all-India writer will emerge."

The writer feels strongly that there is a serious threat to the Gandhian ethos. "We were all inspired by the three great debates: between Tagore and Gandhi on swadeshi; between Ambedkar and Gandhi on the emancipation of the Harijans; Gandhi's debate on the path of decentralised economic development in India. Tagore, Aurobindo, Ramana Maharshi and even Paramahansa belonged to that ethos. That is the tradition of our rishis and bhaktas like Basava, Tukaram and Guru Nanak. The current communalisation, hatred, ghettoisation and fundamentalism should be fought."

A point of view that hardly reconciles with his stated admiration for Pejawar Swami of the Udupi Mutt.     But Anathamurthy, again, disagrees. "He (Swami) is the guru of my caste, he opened the doors for harijans. Even my mother was much influenced by him. But then he became political and went against the tenets of his own religion. Now I oppose him - not only on political, but also on religious, grounds."

P. Lankesh, the controversial Kannada novelist arid editor of the weekly Lankesh Patrika, has some advice for Ananthamurthy. "Except for Dr (V.K.) Gokak, we have had politicians and middlemen presiding over the Akademi. I hope he reshapes the Akademi and infuses into it a bit of creative spirit."