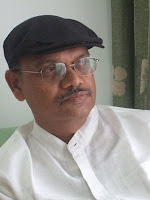 Recently I gave two invited lectures to the students and faculty at Manipal University on "Indian contribution to digital technology" and on "India's Nuclear Programme 1943-2008". At that time I was interviewed by a student of Manipal Institue of Communications. The text published at : http://www.themanipaljournal.com/News/N03208.html follows....

Shivanand Kanavi is an intellectual extraordinaire. A theoretical physicist from IIT Kanpur, he pursued higher studies and research from Northeastern University, Boston and IIT Bombay. Till June 2004, he was the Executive Editor of Business India magazine. The same year he received the Madhu Valluri Award for IT Journalism. He is now the Vice President, Special Projects at Tata Consultancy Services. He occasionally writes for Business India and has authored the book ‘Sand to Silicon: the amazing story of digital technology’. He was in Manipal as a guest lecturer on ‘India’s contribution to technology’ and ‘India’s Nuclear Programme’.

Q: In your book and the lectures you gave, you underscored India’s contribution to the IT industry. Do you think India’s role is downplayed in the mainstream media?

A: India’s success story in the IT business on shores and in the Silicon Valley is well known and receives ample coverage. It is India’s technical and research contribution to IT that is undermined. In fact, ‘Sand to Silicon’ was the first book to document this momentous contribution, prior to which there was no credible literature on the subject.

Q: But, we see most research papers coming out of the West, where universities have lab establishments that encourage ingenious research. The Indian education system is not very research oriented; neither do we have high percentage of budgetary allocations for R&D.

A: Even in the West, students write very few research papers. It is usually seasoned specialists in the field, young graduates or post-doctoral research scholars who produce papers. Also, unless one requires specialized equipment for experimental work in IT, I don’t think there is a problem of money. For example, in 2002 there was groundbreaking research in IIT Kanpur by Chair Professor, Department of Computer Science and Engineering, Manindra Agarwal and two undergrad students. They cracked a problem that had evaded solution for over 300 years! IT and communication research is very mathematical.

Q: The infamous red tape in India in not conducive to business houses. The Tata-Singur row and LN Mittal preferring foreign shores prove…

A: Traditional businesses – yes. Business in India is a challenge. But, it has done well nevertheless; overcoming all odds and being profitable. The Indian business environment gives some of the best returns in the world. Further, in modern businesses in the knowledge economy there aren’t many obstacles. The main hurdle in services like IT and telecom applications is capital and India has its breed of venture capitalists ready to invest in sensible business ideas. The number of entrepreneurs in India is its chief strength when compared with a China or an America.

Q: Coming to the biggest deal today: if nuclear energy is crucial to India’s energy security, what do you say about the US getting cold feet just as the NSG stage of negotiations came – a strategic U-turn?

A: The US and other big powers made certain calculations by which they had to include India in the global system of N-trade sans any restrictions. However, the US has its way of taking along many countries in its strategic flow and then taking a complete 180 ̊ turn, leaving many countries stranded. The NSG operates by consensus, not voting. Domestic political situations in countries like Austria and New Zealand (upcoming elections) compel them to oppose the waiver lest they be termed US puppets. Otherwise, India is garnering worldwide support with all the big powers. Things will straighten out in a while. The NSG was always going to be a problem.

Q: You span theoretical physics, nuclear geopolitics, economics, journalism, IT and are also involved with the publication Ghadar Jari Hai… How does this come about?

A: I have a natural curiosity to understand the society around me – economy, philosophy, science, history. And then comes the need to communicate this understanding to others. It is only out of intellectual curiosity and I never started out to make a career in these fields, but the opportunities today are vast. Educational qualifications don’t matter much as long as one makes an honest effort at tackling the challenge at hand.Ghadar is a quarterly magazine published from Delhi, an attempt by intellectual activists to view our pre-colonial and colonial history with a fresh set of eyes and attitudes. The colonial era left us with an inferiority complex because the British painted all of our pre-colonial history black. As a people we have to face this outlook tainted by Euro centrism. It calls for a movement to assess each of our contemporary problems on its own merit, and harmonise diverse faiths, opinions and political ideologies – something our 5,000 year old civilization has long since been capable of.

Q: Finally, what is next in store for you?

A: Career wise, I do not know. But, I am writing a book on the history of TCS and another one on Indian role in atomic physics. A more ambitious project would be a book that I am planning to write on the Bhakti Movement in India. The 800 years of history will take another four or five years of research to turn into a book.I’ve also wanted to write a book on the philosophy behind quantum physics for the past 25-30 years. Let’s see when I can get time for that.

Posted by Shivanand Kanavi at 5:03 PM No comments: