Business India, November 13-26, 2000
When the chips are up
Jack Kilby, inventor of the integrated circuit, gets his due with the Physics Nobel Prize 2000 - after 42 years
Shivanand Kanavi Nearly 42 years after the invention of the integrated circuit (IC) the Swedish Royal Academy of Sciences announced on 10th October 2000, the award of Nobel Prize to Jack Kilby, the inventor.
Naturally, this calls for comment. It is surprising that the Nobel Com­mittee took such a long time to hon­our an invention, which has changed the way we live in the last 40 years and has directly led to a $231 billion industry.
The committee is still to honour Claude Shannon whose semi­nal contribution to information the­ory is at the heart of all modern communication and is over 50 years old. Similarly, John von Neumann, who laid the foundation of computer science with the theory of finite automata, 50 years back, and who led the team that built the world's first electronic computer ENIAC, at the Institute of Advanced Study, Prince ton, did not receive the Nobel. How­ever, inventors of semiconductor devices like the transistor and Joseph­son junction have been honoured.
Does the committee have a blind spot? Or should the engineers be left out of the highest scroll of honour because of a very narrow-minded reading of Alfred Nobel's charter?
Even if the rest of the technology world discussed these issues, Jack Kilby seemed far away from it all, when Business India interviewed him 48 hours after the announcement, in Dallas, Texas.
Kilby's brevity and humility are astounding. Texas Intsruments (TI), the company where Kilby worked when he invented the IC, made full use of the propaganda value of the prize and rival Intel's executives com­mented - off the record - that the prize should have been shared between Jack Kilby and the late Dr Robert Noyce (one of the founders of Intel). But Kilby, 77, could not be drawn into any controversy. 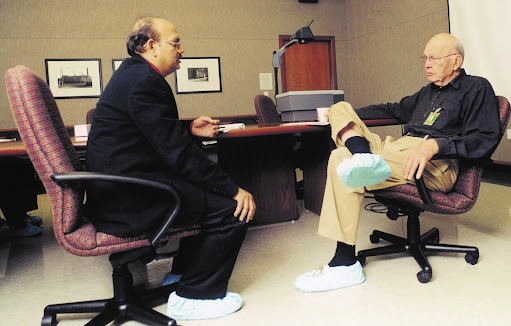 On 12th October, Business India was privy to a very private celebration at the famous Kilby Centre at Dallas, Texas. The $ 150-million cutting edge R&D centre, the pride of TI , hosts state­of-the-art, 0.1 micron chip fabrica­tion facilities. In the cafeteria of Kilby centre, about 300 TI engineers were gathered to honour an icon. The atmosphere was bordering on the rev­erential, as aging Jack Kilby slowly walked into the hall escorted by K. Bala, senior VP at TI. While Bala, a chip veteran for the last 31 years at TI, and the senior-most executive of Indian origin in TI, gave a two-minute speech congratulating Jack on behalf of TI and the staff of the Kilby Centre, the man at the centre was even more brief. True to the culture of micro­miniaturisation, Kilby only said two words: "Thank you".
Besides dozens of other honours, Kilby received the National Medal of Science, in 1970, at the White House. In 1982, he was inducted into the National Inventors Hall of Fame, tak­ing his place alongside Henry Ford, Thomas Edison, and the Wright Brothers in the annals of American innovation. However, there is noth­ing like being bestowed with the Nobel.
When asked why it was that the inventors of transistor were given the Nobel several years ago, he com­mented candidly that their contribu­tion was more basic to semiconductor physics, than his.
Kilby is an institution at TI, even though he stopped doing active work in the company more than 20 years back. "We have a regular Friday lunch with him every week and find interact­ing with him very useful even now,” says Bala.
The unassuming Kilby is a typical engineer, who wants to solve problems. In his own words, his inter­est in electronics was kindled when he was a kid growing up in Kansas. “My dad was running a small power com­pany scattered across the western part of Kansas. They had a big ice storm that took down all the telephones and many of the power lines, so he began to work with amateur radio operators to provide some communications and that was the beginning of my interest in electronics," he recalls.
When he joined TI in the summer of 1958, the company was working on a defence project to miniaturise elec­tronics. Jack, however, had different ideas. Fortunately, he got the chance to check out his ideas, for, soon after he joined, most of the team went on a vacation for which he, being the junior-most member of the team, was not eligible. Kilby spent his time searching for an alternative to the official model.
"I realised that semiconductors were all that were really required - that resistors and capacitors (passive devices), in par­ticular, could be made from the same material as the active devices (transis­tors). I also realised that, since all of the components could be made of a single material, they could also be made in situ and interconnected to form a com­plete circuit," Kilby wrote in a 1976 article titled Invention of the IC. "I then quickly sketched a pro­posed design for a flip-flop using these components. Resistors were provided by bulk effect in the silicon, and capacitors by p-n junctions. My col­leagues were sceptical and asked for some proof that circuits made entirely of semiconductors would work. I therefore built up a circuit using dis­crete silicon elements. Packaged grown-junction transistors were used. Resistors were formed by cutting small bars of silicon and etching to value. Capacitors were cut from dif­fused silicon power transistor wafers, metallised on both sides. This unit was assembled and demonstrated on 28 August 1958," he elaborated.
By September, Kilby was ready to demonstrate a working integrated cir­cuit built on a piece of semiconductor material. Several executives, includ­ing former TI chairman Mark Shep­herd, gathered for the event on 12 September 1958. What they saw was a sliver of germanium, with protruding wires, glued to a glass slide. It was a rough device, but when Kilby pressed the switch, an unending sine curve undulated across the oscilloscope screen. His invention worked - he had solved the problem.
But at the time, did Kilby realise its significance? "I thought it would be important for electronics as we knew it then, but that was a much simpler business. Electronics was mostly radio and television and the first comput­ers. What we did not appreciate was how lower costs would expand the field of electronics beyond imagina­tion. It still surprises me today. The real story has been in the cost reduc­tion which has been much greater than anyone could have anticipated. And it has tremendously broadened the field of electronics.
In 1958, a sin­gle silicon transistor that was not very good, sold for about $10. Today, $10 will buy over 20 million transistors, an equal number of passive compo­nents, and all of the interconnections to make them a useful memory chip. So, the cost decrease has been factors of millions to one. And I'm sure that no one anticipated that".
The main contribution to lowering costs and increasing transistor densi­ties in ICS has, of course, come from the innovation that Robert Noyce was responsible for, while working at Fairchild Semiconductors, before he went on to found Intel. Noyce devel­oped the planar technology of deposit­ing layer upon layer of semiconductors with different doping elements to cre­ate a really compact IC in 1959.
Clearly, both Kilby and Noyce are responsible for the IC revolution. Kilby graciously admits as much. The first Ie made by Kilby had a single transistor, 1.5 mm x 10.5 mm in size. Today, such chips carry millions of transistors. The reso­lution of etching has already reached 0.1 micron (micron = thousandth of a milli metre).
The inventions of Kilby and Noyce have led to two giants now straddling the IC empire: Texas Instruments, the king of digital signal processors that go into every cellphone and communica­tion device, and Intel which is practi­cally inside every PC.
Unlike most inventors, Kilby today has the rare advantage of seeing his work create enormous wealth and in fact changing human life. In his own life time.
Posted by Shivanand Kanavi at 12:32 PM No comments: