Justin Trudeau, PM of Canada apologized in the Canadian parliament  for the Komagata Maru incident in 1914 and tweeted the same.

But what really happened in 1914 at Vancouver and later Kolkata and all over India with the Ghadar Uprising in 1915...Read Madhavi Thampi explaining in Ghadar Jari Hai....


Stirring legacy of the Komagata Maru


Madhavi Thampi tells us about an episode in the history of colonialism that enraged Indians abroad and in India for the callous and discriminatory treatment meted out to an enslaved people. 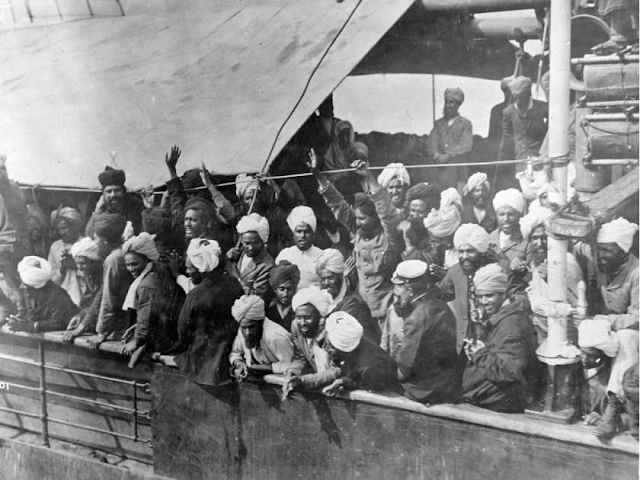 
The struggle against the British colonial rulers was joined by hundreds of streams of Indian people, including Indians abroad.  Poverty and destitution, the drying up of economic opportunities at home, as well as political oppression, had compelled millions of Indians in the colonial period to uproot themselves from their homeland and make their way to places as far away as Mauritius and China, Africa and the Caribbean islands, Australia and the Americas.  However their status, as people who came from a land that had been occupied and enslaved by a foreign power, did not leave them wherever they went.  Abused by racist and colonial authorities in the places they moved to, with strong emotional ties to their communities back home, and with their horizons broadened by their experience as migrants, Indians who went abroad were among the most militant ﬁghters for India’s freedom. The episode of the Komagata Maru, that took place 95 years ago, is a landmark in the anti-colonial struggle that enshrined this spirit of the Indian people.  The Komagata Maru was a Japanese steamship that was chartered in Hong Kong in 1914 to carry aspiring Indian emigrants, mainly from Punjab, to Vancouver, Canada.  As part of the process of conquering new lands and opening them up for economic exploitation, colonialism and imperialism had always sought to use labour from colonies and dependent countries in Asia and Africa.  After the abolition of the slave trade in the 19th century, labour from India and China was in great demand to work on plantations, railroads, lumber yards, mines, and so on.  This gave rise to the notorious coolie trade, in which lakhs of men and women were shipped off in the most barbaric conditions to work as virtually bonded labour in other colonies.


However, from the beginning of the 20th century, discriminatory immigration laws began to be applied, ﬁrst against the Chinese, and then against Indians also, in those places.  Along with these laws, racist campaigns were deliberately launched which warned of “brown-skinned” and “yellow-skinned” immigrants “ﬂooding” those countries and taking over all jobs.  The idea here was not to stop the ﬂow of immigrants from India and China, whose labour was still very much needed by the capitalists in those countries, but to tightly control it.  It was a useful way of engendering divisions among the workers of those countries on the basis of their place of origin, and of preventing immigrants from standing up for their rights out of fear of being persecuted and deported. To put the squeeze on potential Indian immigrants, the government of the British colony of Canada passed two Orders-in-Council in 1908.  One raised the money requirement for the immigrants at one go from $25 per person to $200 – a huge sum of money in those days.  The other stipulated that only those who sailed to Canada in a “continuous journey” from their place of origin were eligible to be considered for immigrant status.  This was a near impossibility for those coming from India.  Meanwhile, the US government also issued regulations to curtail the ﬂow of immigrants from India.


A large number of Indians had by this time made their way to various places in China and Japan in the expectation of going onward from there to North America for work.  Stopped from proceeding further, they had to bide their time for months on end with little or no income.


In the words of Gurdit Singh, the businessman who hired the Komagata Maru: “When I came to Hong Kong for some private business in January 1914, I could not bear the grief and hardship of the Vancouver emigrants who had been waiting in the Sikh temple in Hong Kong.  It was a matter of injustice and darkness, I thought, because our brethren were passing their days in a miserable state for the hope of arriving at Vancouver while staying here for one year and spending money for their eating from their own pockets.”


After ﬁnally getting clearance from the colonial authorities in Hong Kong to set sail, the Komagata Maru left for Vancouver on April  4,1914, picking up more passengers at Shanghai and Japan on the way, a total of 337 passengers.


When they learned of the departure of the ship from Hong Kong, the Canadian government went into a fever of preparations to forcibly prevent the ship from docking at Vancouver and unloading its Indian passengers.  However, the Indians resident in Vancouver, numbering not more than about 2,000, also made their preparations to support their fellow countrymen in every way they could.  When the Komagata Maru reached Canadian waters in May 1914, it was ordered to turn back at once.  After all that they had endured to reach Canada, the passengers refused.  A stalemate ensued, with the Canadian authorities trying to use every means to force the ship and its passengers to leave, including denying food and essential supplies, while the Indian community in Vancouver tried their best to send food and supplies and also to ﬁght a legal battle on behalf of the ship passengers.  This was an extraordinary display of courage and deﬁance, as well as love for their fellow countrymen, by the Indian community.


In the end, after two months conﬁned to the ship, the Indians on board had no choice but to turn back.  The events in Vancouver had among other things raised the level of consciousness of the ordinary working people on board the ship about the real nature of imperialism and about the necessity to free India from the chains of colonial rule.  When the ship approached Calcutta on September 26, they were met by a British gunboat which did not allow the ship to dock at Calcutta as planned, but took it to Budge Budge.  The passengers wanted to take out a procession from the ship to the authorities in the city to register their protest at their treatment.  However, the British authorities had other plans.  Treating them as criminals, they tried to force all the passengers, irrespective of what their plans were, to proceed straightaway to Punjab in a special train.  When the passengers tried to march in a procession anyway, they were met with brutal force.  More than a score of passengers died in police ﬁring, while many more were injured.


The news of the brutal treatment of the Komagata Maru passengers both at Vancouver and when they returned to India aroused widespread fury against the British rulers.  It was directly responsible for the mutiny in 1915 of the Indian regiment posted at Singapore, the ﬁrst such rebellion of a unit of the Indian armed forces after 1857.  It also led to large numbers of Indians from North America, China and other places volunteering to return to India and join the campaign led by the Hindustani Ghadar Party to overthrow British rule by force of arms.


The Komagata Maru episode holds important lessons for us Indians today.  The nature of imperialism has not changed, even if direct colonial rule over India and other countries has ended.  When they want, the capitalists in various countries use the state to manipulate immigration laws and regulations to either entice labour from poorer countries to come and work their enterprises, or to discourage them when that suits their interests.  Migrant workers, be they from India or other countries, have no rights and are always under pressure to accept whatever conditions are imposed on them.  Far from defending their rights, the present-day Indian state shows only lip sympathy for these hapless working people from our country.


The Komagata Maru episode  shows the unconquerable spirit of Indian people to unite and ﬁght against injustice, whether they are in India or abroad.


Justin Trudeau @JustinTrudeau May 19
No words can fully erase the suffering of Komagata Maru victims. Today, we apologize and recommit to doing better.pic.twitter.com/NsryzhUbp1 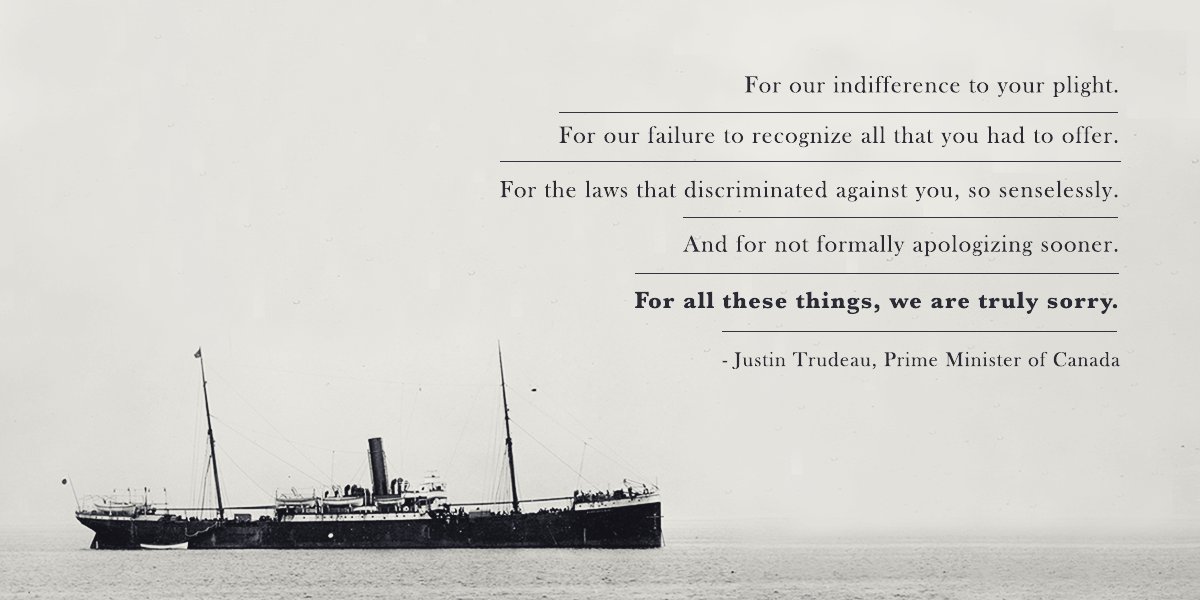