The chemistry of industry
Prof M.M. Sharma, FRS, was the first Indian engineer to be made Fellow of Royal Society of London. Recently he was awarded the Leverhulme Medal established on the occasion of the tercentenary of the Royal Society “in recognition of his work on the dynamics of mu1ti-phase chemical reactions in industrial processes”. The medal has been awarded to only five other chemists and engineers since 1960.

He has made significant contributions in making the University Department of Chemical Technology (UDCT), Mumbai, of which he is the director, into a world class centre of excellence in chemical engineering. He spoke to Shivanand Kanavi on industry-academia interaction. 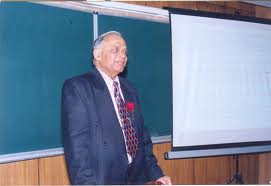 How did you acquire the mindset of doing basic research of very high value and at the same time being concerned about commer­cialisation of scientific results?
The answer to your question on my interest in interaction with indus­try goes back to the roots of the organisation (UDCT). There is no family history of business or great academic work. The desire to link practical problems with academic work is a later development.

Early faculty members at UDCT, like Professors Venkatra­man, G.P. Kane, G.M. Nabar, N.R. Kamath thought that UDCT should have organic links with industry in a professional way and not in terms of lip service.

As soon as India became inde­pendent, there was a vacuum. Who will advise textile mills in textile processing? The industry knew only spinning and weaving. After the Second World War, BIOS reports became available, to pro­vide the guidelines for organic chemical industry. Thus, a mutually beneficial relationship could be sustained.

From my Cambridge days, I had been publishing papers in Faraday Society Transactions, etc, but I was working on a problem which had links with industry even in the puritan atmosphere of Cam­bridge. In fact, those days, I was lucky to have an idea patented in my name and sell it to Shell International. My original con­viction became terribly strengthened with this exercise.
I would say that the monograph that I wrote with my mentor, the late Professor P.Y. Dankwerts, FRS, GC, in Cambridge, on 'Absorption of carbon dioxide in amines and alkalies', gave me great satis­faction. I think it became a sort of classic in chemical engineering where we explained how from the very first principles you go to the design of final industrial equipment.

What led to your celebrated work on 'microphases'?
At UDCT from the beginning, we had taken up problems, which were very heavily idea-centred because we had no budget. A problem of making precipi­tated calcium carbonate (which goes into toothpaste, etc), came to us. On the face of it, it was very simple. Calcium oxide plus water gives calcium hydrox­ide, which, with carbon dioxide, gives calcium carbonate.

At that time an idea came to us about the role of 'microphases', a phrase that we used much later. Microphase is a phase where the characteristic dimension is less than the diffusion path. In simple language, particles, which are sub-micron to few microns in size - it could be a small bubble, a small liquid droplet, solid particle - constitute the microphase. The microphase changes the dynamics of the process. For example, when you hydrate calcium oxide you get particles within micron range with­out expenditure of energy. Therefore, you see how real life problems are the harbingers of problems of great the­oretical interest!
It is a great pleasure for an applied scientist, when his idea works, and he can demonstrate its academic purity by way of research publication. It gives you a kind of thrill, which has a powerful catalytic action.

You mentioned the BIOS reports. Can you explain what they were and how the war triggered applied research in UDCT?After the German defeat in World War II, teams were formed with experts from allied forces to visit every German chemical plant and other plants and find out all the details about their manufacturing processes. German dyestuff industry and textile aux­illiaries were well known. The mother company was IG Farben from which Bayer. Hoechst and BASF were later born. The British Intelligence Office pro­duced these reports. Every detail of the manufacturing process was given in these reports.

They were then the starting point for entrepreneurs in India to start industries, we at UDCT had access to these reports and they were a fantastic source of infor­mation. The entire recipe was given in detail. Indians had to learn textile pro­cessing. Our textile-processing course was immensely helpful. It provided trained manpower when British experts had left.

Textile and sugar are mother indus­tries in India. They gave impetus to many things. All the original chemical compa­nies in India were textile houses ­Mafatlals, Sarabhais, Srirams in DCM, Jaikrishna Harivallabhdas. Ambika Mills, Atul. etc. From textiles to dyes and bulk chemicals is how we developed in India. Plastics and synthetic fibres, which dominate the chemical industry today came into the scene much later, in the late 1960s and 1970s.

Your advice is sought by almost the entire Indian chemical industry, Why not develop technology and licence it rather than be a consultant?Licencing is a complicated business. To advise industry on how to get more from existing assets is the most rewarding experience in terms of relationship between an academic and industry. Industry gets benefit immediately: more profits, less load on effluents, much more throughput out of existing equipment. The academic gets the benefit of seeing his ideas work and gets emboldened. It also buttresses his income. The student gets tremendous advantage because the quality of lectures he gets improves.

There is lot of talk in India about uni­versity-industry interaction, but it is only talk. People never put it into practice.

Consultancy by faculty members should have a wider base. If one person is involved in a faculty of 20, the spread fac­tor is very limited. At least one-third of the faculty should be involved.

Last year we generated Rs.43lakh through consultancy. Bombay University got one-third of it. This year will we be able to do it? Was it a freak year? No. by all indications we will make it this year also.

Lawyers, chartered accountants, doc­tors etc. practice consultancy, why not engi­neers? Of course, a high level of professional integrity is required. One black sheep can give a bad name to the institute. Any underhand dealing will get exposed - sooner rather than later.
Intellectual curiosity is also satisfied along with material needs and we have a greater chance of retaining a good per­son. This is important; after all an acade­mic's salary is nowhere near corporate salaries.

What do you think about sending teachers to industry on a sabbatical? Or about academics being on the boards of companies?
We have practiced these things very rig­orously. In the beginning, instead of sending a faculty member for a whole year, we see them on vacation place­ment so that he does not have to take leave and worry about continuity in service etc. A number of people have been on the board of companies and even many companies simultaneously. We encouraged it.
We have created as number of visiting professorship through private endowment, for persons from industry. We have not left any stone unturned.
Industry is realizing that their engineers need to upgrade and retrain. So they are requesting us to design refresher courses of 2-3 weeks’ duration.
Being science-based, the chemical industry is receptive to new ideas. If -you see Department of Science and Tech­nology's booklet on R&D in Indian indus­try, it is the chemical industry which leads; largely domestic companies and especially the technocrat-driven companies. 'The big C in their capital is technology and they have to be superior to be competitive nationally and internationally.
Of course, in India there is horizontal pilferage of technology because of Which the industry has acutely suffered in the last 20 years. The cost of innovation is high while that of pilferage is zero.

What is your view on the IPR controversy?Let us be very objective. When the cost of development is abnormally high and that too based on private money, it will be I treated as property. After a drug or agro­chemical molecule has been found, anybody can improve the technology and sell at a lower cost because the developmental costs have been borne by someone else. Why are we feeling diffident that we can­not generate ideas of that calibre?

I will give an example of missed oppor­tunities from chemistry. N.R. Iyengar had a brilliant idea to make an intermediate for rubber chemicals. He published that paper in Tetrahedron Letters. If he had the awareness, he would have patented it. Two or three years later there was a patent from Monsanto where the first paper referred to was N.R. Iyengar's! Based on that idea a commercial plant can be put up which costs less and is less polluting. A known product but made by a better route. I am just giving an example. If he had patented it, it is quite likely that Monsanto would have bid for it. He could also have then published it.

With the increasing integration of the Indian economy with the world econ­omy, there is a fear that Indian R&D will suffer. What is your view?I am convinced that globalisation will give a big boost to indigenous R&D and that it will get recognition internationally. The cost of research is so much lower in India than anywhere else. Talent is in reasonable abundance. All said and done I here is a worldwide trend against sharing technology. Therefore, the desire to come out with alternate technology, which is superior and patentable, will get a boost. Even in this liberalised atmosphere, many are not able to put up plants because nobody is ready to sell the technology to them. This will continue, because the developed nations perceive India as a potential competitor
Posted by Shivanand Kanavi at 6:01 PM

The chemical industry in India is counted among those industries that began working immediately after the country's independence in 1947. Now India is a biggest suppliers of chemical products & commodities worldwide.