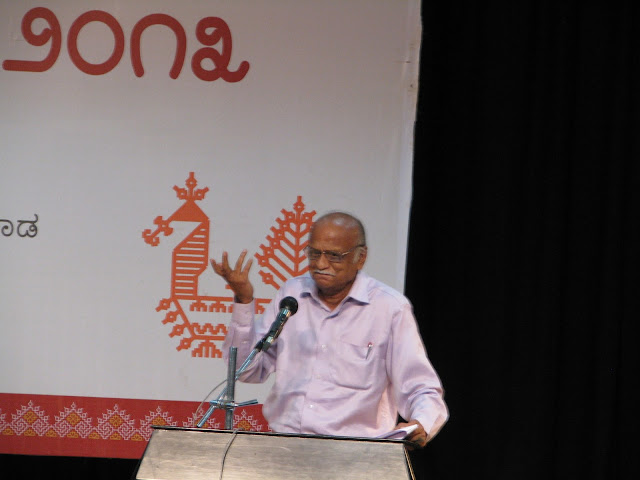 Today morning, (Aug 30, 2015) the town of Dharwad a major educational and cultural centre of Karnataka was shocked out of its contented and cultured life, when one of its leading lights Prof M M Kalburgi a renowned researcher into Kannada culture and prolific writer was shot down at his residence. The tragic loss has shocked the entire literary world of Karnataka and thousands of Prof Kalburgi's admirers and students. Speculation is rife on who might have ordered a gangland Mafiosi style hit on a 77 year old writer. The day was filled with shocked admirers and VIPs streaming to his residence, hospital and to the grounds of the famed Karnatak College, where he once studied and where now he was lying in state.

The funeral will be tomorrow noon in the grounds near Karnatak University Campus, according to Lingayat burial traditions, not too far from the lecture halls where he once taught thousands of students for over three decades on the nuances of Kavirajamarga the 9th century Kannada classic on poetics or the correct way to read and interpret the works of Adikavi Pampa the great 10th century Jain Kannada poet or the radicalism in 12th Century Vachana literature of Basavanna and other Lingayat Sharanas of Karnataka.

Dharwad unlike other cities, does not count its IT billionaires or the Real Estate Rajas but it does proudly reel off the names of its Gyan Peeth and Kendra Sahitya Akademi Award winners; poets, novelists, playwrights, researchers and of course an unending stream of top notch Hindustani musicians. Hence the shocked town and the rest of Karnataka hope that the supari style killers who came into his home acting as students-- perhaps knowing that it was always an open house to researchers-- and shot him in the head, in cold blood at close quarters, and those who hired them, would be caught soon by police investigators. 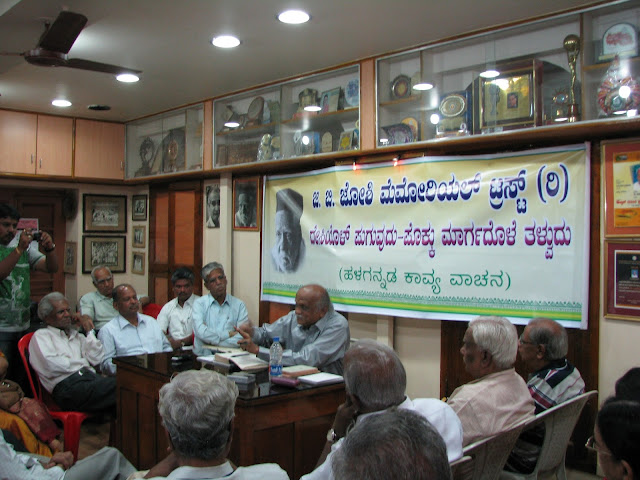 I was not his student in a formal sense but my parents being his neighbours and close friends afforded me an ease of entry into his warm friendship whenever I visited my Janmabhoomi Dharwad from my Karma Bhoomi, Mumbai. He gladly shared his vast knowledge, his concerns and his flashes of new insights into the radicalism of 12th century Sharana Sahitya, which was our common ground. Every time I met him he would wave with great enthusiasm a bunch of new books that he had either written or edited. His energy was infectious. He was equally an indefatigable organiser and motivator who cajoled others into his numerous projects.

He was prolific. His four volumes of research papers; Marga I-IV and literally dozens of volumes of Vachana literature that were edited, were part of his academic output during his teaching career. After a brilliant teaching career in Karnatak University Dharwad he became the Vice Chancellor of Kannada University at Hampi where he once again showed his organising abilities. Post retirement he continued to write and edit profusely.

His recent output in the past five years alone is mind boggling. He edited and published the complete literary and journalistic works of Basavaraj Kattimani, a progressive writer from Belagavi (formerly Belgaum). He also edited and published several volumes of the great early 20th century researcher, F G Halakatti from Vijayapur (formerly Bijapur). He also made a great gift to medieval historians by getting seven volumes of world history written in Persian by a scribe in the 18th century Adilshahi court of Vijayapur (Bijapur), translated and published in Kannada. 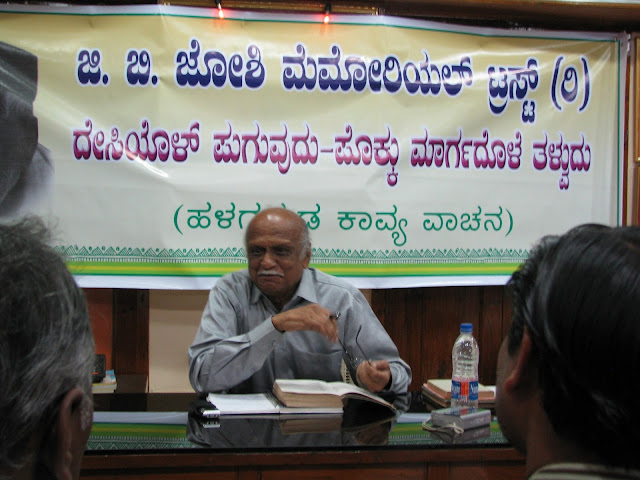 He was now engaged in editing a volume of over 2500 selected vachana poems to be published in 20 different languages. His long introduction to the volume is a classic commentary on the essence of Lingayat sharana movement. He supervised and guided the translators in different languages as well. As a result, in 2012 Kannada, Sanskrit, English, Urdu, Bengali, Hindi, Marathi, Telugu, Punjabi, Tamil editions were published by Basava Samiti.

When I met him last week he assured me that the remaining 10 language editions in Dogri, Maithili, Assami, Bodo, Gujarati, Malayalam, Konkani, Nepali, Odiya, Santhali, Kashmiri and Sindhi are also in the final stage and would be published in the last quarter of this year. Translations into Mandarin, Japanese, French and Spanish were also on the cards.

He then pointed to me a heap of corrected proofs of over 20,000 vachanas in Kannada, which would be published in two slim volumes in literally Bible style with similar paper and asked me if I knew printing experts who could deliver a high quality product soon.

And all this after "retirement" ! I joked with him that the name plate outside his house was a mistake. It said Vishrant Kulapati (Retired Vice Chancellor) and it should have read Avishrant (tireless) Kulapati instead !

His researches and speculations were bold and were often iconoclastic. He was a great admirer of Basavanna the 12th century sharana and founder of Lingayatism. The radicalism of Basavanna and his sharana colleagues inspired Prof Kalburgi to take on all those who claimed to be leaders and moral guides of Lingayats today but who would not stand the test of Basavanna's radicalism.

The 12th century sharana movement with Basavanna as the spearhead founded Lingayatism and in short stood for: complete dignity of labour; dismantling of caste discrimination; gender discrimination; temple worship and all meaningless rituals. It also gave a prominent egalitarian social twist for the first time to the older experiential Bhakti movement that had primarily advocated paths to individual spiritual salvation. It was not only inclusive towards all castes and communities but also put forward an egalitarian economic and social philosophy and not renunciation of the world for other worldly goals.

In today's India very few would of course stand Basavanna's test. This led Prof Kalburgi to not only take on casteist and conservative forces in general but also some powerful conservatives among Lingayats.

Conservatives found him polarising and some researchers disagreed with his speculations while admiring his scholarship but he posited that culture studies and historians have to perforce join the dots, speculate, interpret, interpolate, extrapolate and take leaps to make progress even if some of them later turn out to be wrong.

While scholars may not disagree with his approach in principle and listened to him with interest, students lapped it up. Status quoists or those who feared his criticism however would adopt extra-academic methods like demonstrations and stone throwing outside his residence.

Shrill elements in the media would be all too happy at times to take his remarks out of context or even misquote him to create a controversy. For example a remark he had made about superstitions in a public meeting in Bengaluru which had been organised to discuss the draft Anti-superstition bill prepared by Karnataka Government led to screaming headlines in one of the news papers leading to death threats and cowardly acts of vandalism at his residence last year.
But he carried on and when I asked him once about such threats he quoted me a vachana by Basavanna himself: 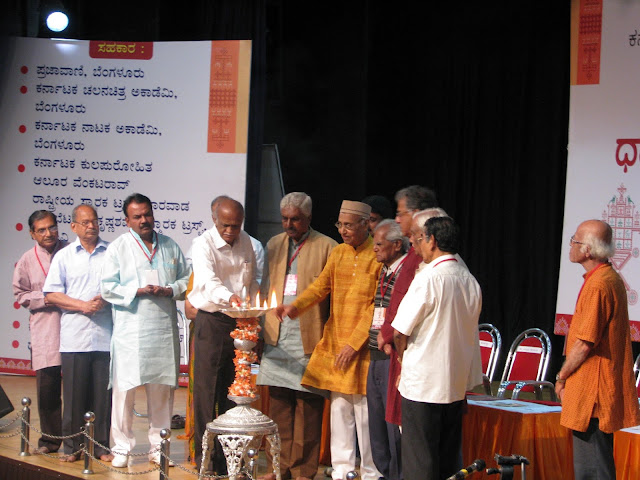 Posted by Shivanand Kanavi at 2:20 AM